Ultra vires regulations- does association with a banned outfit make you a TERRORIST?

Ultra vires regulations- does association with a banned outfit make you a TERRORIST?

According to official government figures, on an average 2 dalits are killed and 3 raped every day across India. All the more shocking is the fact that even in Maharashtra which gave birth to major social reformists and progressive thinkers like Jotiba Phule and Dr. Babasaheb Ambedkar, the incidence of atrocities remains unacceptably high.

In this landscape it cannot be surprising that dalit and adivasi youth have begun to voice their protest more openly than before. After the police killings at Ramabai colony and later, the Khairlanji massacre many protests took place. Instead of bringing the guilty to book, the State responded by branding the protesters as Naxalites (Maoists). Dalit cultural activists like Sudhir Dhawle were jailed for "sedition" and remain behind bars for years, pending trial.

Mere association with a banned outfit or studying its literature does not tantamount to being a terrorist, says a recent Bombay High Court judgement

The definition of a 'terrorist' and 'terrorism' has been a major topic of continuous debate in India especially in recent months. Can a person collecting and studying literature of a banned party be defined as a terrorist? Can a song with revolutionary lyrics — despising social inequality — be called an act of terror? Or is it that quoting Mao Tse Tung or Karl Marx in a street theatre be defined as a terrorist ploy?

A recent judgement by the Bombay High Court has stated that such acts are not terrorism. Even the judge went on to say, "… the expression of views to the effect that a change in the social order can be brought about only by a revolution would not amount to any offence."

The judgement — delivered while granting bail to four members of Kabir Kala Manch (KKM), a Pune-based cultural group of Dalit protest singers — has been lauded by social activists and lawyers in Chhattisgarh and other States where a large number of tribals are languishing in jail allegedly for participating in Maoist rallies or providing food to the rebels. The KKM members were arrested and booked under sections of the Indian Penal Code (IPC) and the Unlawful Activities (Prevention) Act (UAPA) allegedly for being members of the banned CPI-Maoist.

The judgement by Justice Abhay Thipsey has specifically questioned Section 20 of UAPA which penalises members of 'terrorist gangs or organisations involved in terrorist acts' with imprisonment for life. Quoting extensively from several verdicts of the Indian and U.S. Supreme Courts, the judgement says that Section 20 of UAPA challenges Article 19 of theIndian Constitution that guarantees freedom of speech, right to form unions and assemble peacefully.

According to the judge, KKM members were arrested for practising rights guaranteed by Article 19. Moreover, the same section of IPC, 120B, which was used against Afzal Guru for allegedly abetting a criminal conspiracy, was also used against KKM members for associating with a banned outfit.

Deconstructing various sections of IPC and UAPA used to frame charges against KKM members, Justice Thipsey said, "Mere membership of a banned organisation will not incriminate a person unless he resorts to violence or incites people to violence," quoting, inter alia , from a Supreme Court judgement.

Justice Thipsey added if "passive membership" of a banned party is criminally liable, then parts of UAPA may become ultra vires . "It is very clear from the observations made by the Supreme Court that if Section 20 were to be interpreted in that manner (passive membership as active terrorism), it would at once be considered as violative of the provisions of Article 19 of the Constitution of India, and would be struck down as ultra vires ," page 37 of the judgement stated.

Justice Thipsey has also expressed "surprise" that KKM members were arrested for organising "street plays wherein social issues such as the eradication of corruption, social inequality, widening gap between the rich and the poor, the exploitation of poor, etc." are addressed. "There is nothing wrong in raising these social issues," he said.

"The same views (regarding social inequality) are expressed by several national and eminent leaders and the expression for these views cannot brand a person as a member of CPI-Maoist. On the contrary, such a reasoning would indicate that these issues, which are real and important, are not addressed to by anyone else, except the CPI-Maoist, which would mean that the other parties or social organisations are indifferent to these problems faced by the society," the judgement said. Advocating the teachings of Karl Marx or "having some faith in the Maoist philosophy" is also not criminally liable, said the judge. The judgement has also emphasised that possessing of banned literature of an outlawed political party (CPI-Maoist in this case) is not an offence.

In large parts of India, especially in States where tribals are in jail for being alleged sympathisers of the CPI-Maoist, the judgement has acted as a shot in the arm of the activists and the lawyers. "This is a landmark judgement in context of Chhattisgarh, as there are more than 2,000 tribals languishing in various jails. However, I am not sure if this verdict will be taken into cognisance while passing a judgement," said K.K. Dubey, who represents several under-trial tribals in south Chhattisgarh. Activists in Andhra Pradesh, Odisha and Jharkhand have also welcomed Justice Thipsey's judgement. 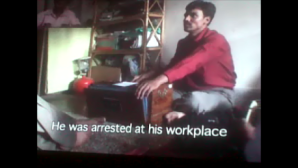 Deepak Dengle, of Kabir Kala Manch before his Arrest

On , 23rd March,  2012 day of hanging of Bhagat Singh, Rajguru and Sukdev were hanged in jail by the British,  a day-long hunger strike  was observed by over 200 `political prisoners' in various jails in Maharashtra, including the Angela Sontakkey and four women prisoners in Byculla women's jail and Sidharth Bhosale and Deepak Dengle of Kabir Kala Manch who are lodged at Arthur Road jail.

The English Translation of the letter

Commemorating the martyrs day of Shahid-e-azam Bhagat Singh, Sukhdev & Rajguru, political prisoner in Nagpur jail have gone on fast since last night.
March 23 , The martyrs day is a important day for all political prisoners.All the political prisoners have to be released without any conditions.and the system followed for all those political prisoners who have been granted bail, have been released by the courts, but are re-arrested at the gates of the prison, has to be stopped henceforth. These are our 2 demands that we want implemented and hence we are on a one-day token fast for it.
Bhagat Singh & his aides were responsible in helping to chase away the British Colonial rule and helped to establish the state of the deprived, labourers. Bhagat Singh and his supporters put up and inspiring fight for this mission. Forget fulfilling Bhagat Singh's dream, that remotely isn't possible. However those milking the people in the name of Bhagat singh are political leaders who have established a rule of dalals, traders, businessmen, mafia and goondas. Earlier we had one East India company ruling over us, today there are innumerable foreign MNCs who are ruling our country invisibly, from behind the curtains. Our country is truly not free in the real sense. And it is very imp to free the country once more & give freedom in its true sense.
Our call to fast is also a way to remind the public of the true spirit of Bhagat Singh's fight for freedom. We have been inspired to take his message to the people of India & the youth regarding Bhagat Singh's true legacy & we believe the current leaders, rulers are anti-nationals. As a result all the activists, workers and supporters of Bhagat Singh have been dumped in various jails across the state. Because we are fighting for the true freedom of this country, taking inspiration from Bhagat Singh, we are political rebels, we are ideological prisoners, but we are NOT criminals. therefor the political prisoners have to be released without any condition and this is our main reason to sit on a fast today. We will continue to keep alive the spirit & memories of Shahid Bhagat Singh, is the message that a political prisoner has circulated in a release.
date – 21-3-2012
venue – Nagpur Madhyvarti jail, Nagpur
1. Shridhar Shrinivasan
2. Bhimrao Bhopte
Read their letter in Marathi sent from the jail 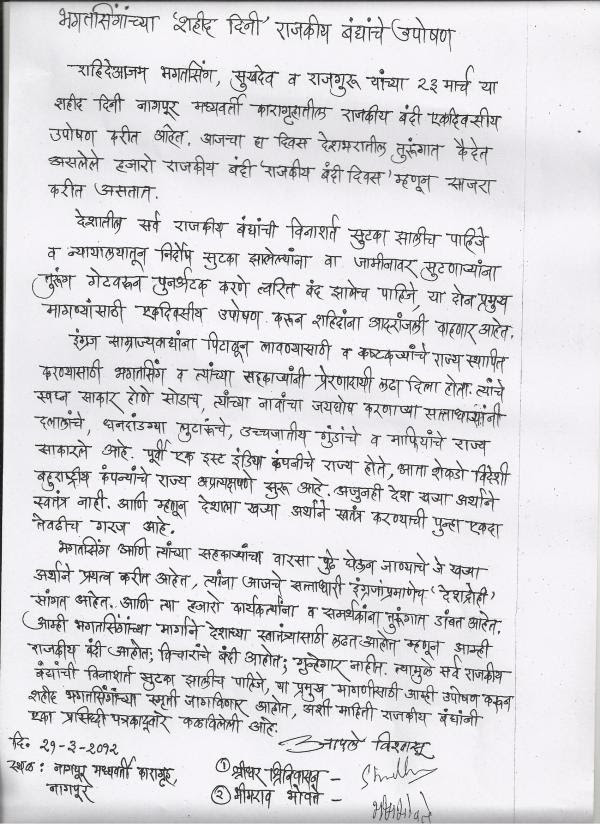