Modi would Never support a Palestinan state and celebrates Netanyahu`s win! Indian PM Modi congratulates Netanyahu in Hebrew,while there was stony silence from the US Palash Biswas

Indian PM Modi congratulates Netanyahu in Hebrew,while there was stony silence from the US 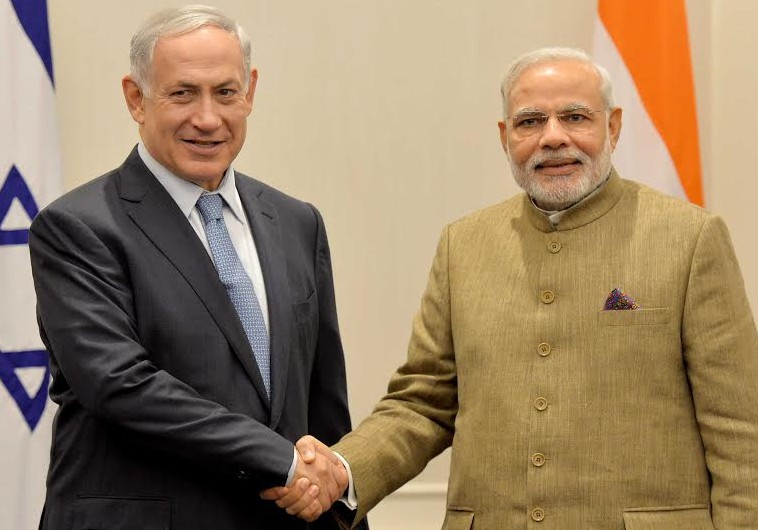 In a post from Modi's twitter account, he wrote in Hebrew "Mazel tov, my friend Bibi @Netanyahu. I remember our meeting in New York last September warmly," followed by a an English translation in a separate tweet.

Around the world, Benjamin Netanyahu's re-election as Israeli leader was greeted with a mixed reaction.But Modi chose to clear the air and showcased his alignment wih Netanyahu..

Is he behaving as the Prime Minister of India,this question has to be answered.Specifically while,there was stony silence from the US, where President Barack Obama has a difficult relationship with the Likud leader, and where American Jews may now need to readjust their thinking on Israeli policy.

Historian Simon Schama was among those pondering the repercussions of the Israeli prime minister's statement this week that he would not grant a Palestinian state, and that he would continue to expand Jewish settlements.

"There will now be immense soul-searching in [the] American Jewish community," said Schama, "not because Bibi won but because of what he said." The majority of American Jews did not want him to make his speech to the US Congress earlier this month, said Schama, and "his line on Palestine will deepen this rift".

In European capitals those concerns echoed, with former Swedish prime minister Carl Bildt agreeing that Netanyahu's victory risked a "profound crisis on [the] Palestinian issue". He added that it was now "difficult to see any credible political path forward".

In Ramallah, chief Palestinian negotiator Saeb Erekat said his re-election was due to "a campaign based on settlements, racism, apartheid and the denial of the fundamental rights of the Palestinian people".

But further east, where Israel's diplomatic attention has now turned, Netanyahu's re-election was greeted "warmly" by Indian Prime Minister Narendra Modi, who embraced the result with the words: "Congratulations to my friend Bibi."

Since Atal Times,India has been a close ally of Israel as much as Untied States of America.In accordance with Amirican interest Indian traditional pro Palestiinan diplomacy had turnaround long before with the demiose of Mrs Indira Gandhi.

You may remember the tears of Yaser Arafat as he reached New Delhi after Indira`s assassination. Incidentally,Arafat was also assassinated.

The mystery of the assassination of these leaders has not been solved as yet which changed the equation In South Asia as well as Middle East and suddenly India became the enemy of Palestine to support Israel and handed its internal security to Mossad.

Israeli Prime Minister Benjamin Netanyahu said he will do everything in his power to ensure the "well-being and security" of all Israeli citizens.

It literally means that he would do everything to destroy Palestine.

Mind you,Netanyahu made his comments on Wednesday at the Western Wall in Jerusalem, a day after his conservative Likud party scored a resounding victory in Israel's parliamentary election.

Netanyahu said earlier this week he would never support a Palestinian state, reversing the position he had held during his administration as the two sides conducted peace talks that eventually broke down.

The election was viewed closely regarding its impact on U.S.-Israeli relations. Differences on key issues, including the Iranian nuclear negotiations and stalled peace talks, have led to increased tensions between the two governments.

White House spokesman Josh Earnest said that  unprecedented security cooperation between the United States and Israel will continue, and he voiced support for a two-state solution with Israel and the Palestinians.It means that United States of America woul never support a Palestinian state.

"Unfortunately it looks that the Likud will form the next government, and that means the old policy will continue," Abdullah said. "Netanyahu was very clear in his last days of the campaign that he will never allow a Palestinian state, he will not withdraw one centimeter from the occupied Palestinian territories, Jerusalem will stay united as the capital of Israel and that means it closes all the options for peace negotiations."

The Palestinians are now likely to press ahead with their attempts to bring war crimes charges against Israel in the International Criminal Court.

On the other hand,a U.N. spokesperson, speaking on behalf of Secretary-General Ban Ki-moon, said it will be incumbent on the new Israeli government to create the conditions leading to a final peace deal with the Palestinians. He said Israel should take steps including a cessation of illegal settlement building on occupied Palestinian land.

In Brussels, EU foreign policy chief Federica Mogherini said the bloc is committed to working with the incoming Israeli government on a "mutually beneficial relationship" and on relaunching the Middle East peace process.

In an interview with VOA, Middle East expert Aaron David Miller said the victory of Netanyahu's Likud party does not mean the end for Middle East peace talks.

"The peace process will never die, it's like rock 'n' roll, it is essentially frozen," Miller said. "Whether or not the prime minister for campaign purposes or out of ideology walks back his commitment, I find much less consequential. Reportedly, he's made commitments privately which endorses this view. So which one is it, his public commitment, his private commitment?

"I suspect that in the next 20-plus months, there will be an effort at least to prevent matters from deteriorating, and that could involve some sort of effort on the part of the [U.S. Secretary of State John Kerry]," he said.

Netanyahu clarified that if he is given the nod by President Reuven Rivlin to get first crack at forming a coalition government, he intends to create a right-wing government.

"A leftist government will be dependent on the Arab list and will submit the whole way" in making concessions, warned Netanyahu. "A unity government will not be formed with Labor, there is no way to bridge the gaps between us."

The prime minister's mention of the joint Arab list comes after Arab party head Ayman Odeh said "after the elections, we will listen to what Herzog has to say and then we will decide."

The Arab list has been showing strongly in polls, garnering between 11 and 13 seats and coming in as the third largest party in numerous polls, meaning Herzog could indeed find himself dependent on a coalition with them to reach the needed 61 seat majority in forming a coalition.

"The revolution is in our hands, go out and vote," urged Herzog during a visit to Modi'in. "This is a fateful battle on the future of the state."

Turning his sights on Netanyahu, who warned earlier that massive Arab voter turnout threatened the future of a nationalist government, Herzog said "Netanyahu's panic is embarrassing."

"Those who want a prime minister who cares about citizens and doesn't incite or discriminate needs to get up, go out and vote," said Herzog. "Let it not turn out tonight that we get a radical government of Netanyahu and (Baruch) Marzel who will break apart Israel. There is still time to get up and vote."

Herzog's choice of words in saying the right will "break apart" Israel may be seen as ironic, given that in late 2013 he himself revealed his plan is to divide Jerusalem and give up massive swathes of Judea and Samaria in forming a Palestinian state.

As for Marzel, the Yachad-Ha'am Itanu joint list with his Otzma Yehudit party has been appraised by many as being the key for a right-wing coalition, given that if it fails to pass the threshold percentage Likud may be unable to form a coalition.

Walla! reported that the Yachad list is a few thousand votes short of passing the threshold with an hour left to go, although there are no official statistics until thevoting ends and the counting begins.