Posted by The Himalayan Voice:
[We had posted Tim Macfarlan's report on Nepal's recent devastating earthquake and relief works published in The Daily Mail on July 26, 2015. Below posted, as received , today are two critical comments on the subject from Kathmandu.- The Blogger.] 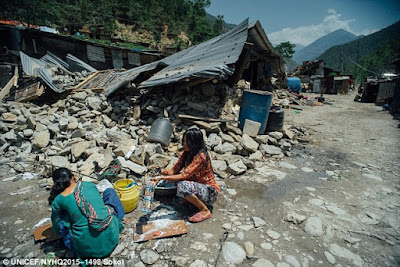 ---------- Forwarded message ----------
From: Bihari Krishna Shrestha <biharishrestha@gmail.com>
Date: Mon, Jul 27, 2015 at 11:42 AM
Subject: Re: THIS IS MOST UNFORTUNATE AND UNACCEPTABLE
To: The Himalayan Voice <himalayanvoice@gmail.com>
Dear Himalayan Voice,
I very much appreciate the tenor of your title to this piece, This is Most Unfortunate and Unacceptable. And this is copied to just about everybody who matters in Nepal. But do you think this is going to have any corrective impact?
Of course, not.
There is nobody in Nepal who cares about the kind of your protestation. Earlier during monarchy, the king used to be worried, because such developments would poorly reflect on his regime which the world considered to be archaic. And something used to happen. But with India's help to Nepal, monarchy is gone. In other parts of the world, the army moves in, like General Susi in Egypt in recent times, Pervez Musharraf in Pakistan a bit earlier or General Franco in Spain much earlier and so on. Our own army does not harbour such concerns and is fully content as long as this is left alone to its own little empire (read, fiefdom) where some of the most corrupt of traditions inNepal remain completely unchallenged.
Then,there are super powers like America, the world policeman and the 'gatekeeper of democracy' in the world, for whom a regime is okay as long as its people get to cast votes occasionally. And for our own feudal exploiters, now masquerading as politicians and people's representatives, nothing suits them better than the protection of the American democracy to continue to loot the hapless people of this impoverished country. Since The Himalayan Voice is based in the US, I urge you to make this representation to those guys in the Capitol Hill and in The White House with the following question:

Is it morally judicious for them to be protecting the "democratic regime" in Nepal even as the millions of the earthquake victims continue to go through some of the worst in human suffering, simply because the feudal crooks at the helm of affairs cannot settle their "bhagbanda" (literally, sharing of the booty), and therefore, have stalled decisions for earthquake relief ?
Even after two months of donor conference where billions of dollars have been pledged, the earthquake rebuilding authority has not taken any shape, even as the quake victims in millions languish in rain-washed conditions during these monsoon months. For quite sometime, the UShad been outsourcing its foreign policy decisions regarding Nepal to India, ironically, a country that is home to the most of the destitute people in the world. While India has not been able to put its house in order even after seven decades of its so-called independence, it also goes about creating what an Indian author has called, "intrinsic instability" in its neighbourhood.
After PM Modi's rise to power in India, for a while it seemed that a more rational decisions would follow in New Delhi. But now back to square one all over again, New Delhi is now hosting the same crooks from Nepal: Prachanda, the supreme commander of the so-called people's war, who has the blood of 17,000 innocent Nepalese in his hand under India's own watch - he was hosted by India all those years-- has been the first to be invited and given Maharaja treatment in Delhi ! Now, more crooks are on their way for similar privilege. While India has always tried to such the blood out of this landlocked country, what she does to Nepal remains a great disservice to humanity in general, given the fact that she like to be known in the world as the biggest democracy.
In short, it is time for the United Nations to set up a new mechanism for good governance with the mandate to move into countries like Nepal where the people have been rendered structurally helpless to bring about any improvements in its governance situation through the available democratic means. Dear Himalayan Voice, please draw the attention of the Secretary General of the United Nations and of the President of the United States in this respect.
Warm regards
Bihari Krishna Shrestha
---------- Forwarded message ----------
From: Kalyan Bhattarai <kdbhattarai2009@gmail.com>
Date: Wed, Jul 29, 2015 at 9:23 AM
Subject: Re: THIS IS MOST UNFORTUNATE AND UNACCEPTABLE
To: Bihari Krishna Shrestha <biharishrestha@gmail.com>
Cc: The Himalayan Voice <himalayanvoice@gmail.com>,
Yes this is most unfortunate and unacceptable to people but for corrupt leaders  it is nothing rather for them it is   untimely Dasai as there is enough fund to loot. For the corrupt leaders  neither the  earthquake   victims nor their miserable situation after 3 months of earthquake   also matters the Prime Minister and party leaders are leeches who enjoy sucking Nepalese people's blood.  and are sadistic  The serious question as Mr Bihari ji also raised why not the country like USA do something and force the corrupt rulers to give due attention to the earthquake victims. See the reality due to Bhagbhandas politics - the corrupt looters are not able to nominate the CEO of the newly formed authority to start the relief works.
Nepalese politicians, so called leaders and government are just the   bunch of goons who know only to loot the nation. We are so hapless that can do nothing and forced to see the miserable condition of the earthquake   victims. There are so many so called civil societies and other organizations but they all are just busy serving the corrupt leaders in hope of getting some share in the looted pie.
It is shame for the Nepalese intellectuals to call themselves as intellectuals. And  thanks to The Himalayan voice for raising such important issue but the rulers have made this country so useless and people so hapless that there is hardly anything we can do . I have no words to share the sorrow of the earthquake   victims who are completely ignored by the corrupt power hungry politicians  I agree with the opinion of Bihariji .
Kalyan Dev Bhattarai
--
Pl see my blogs;
http://ambedkaractions.blogspot.in/
http://palashscape.blogspot.in/
Feel free -- and I request you -- to forward this newsletter to your lists and friends!
Posted by Palash Biswas at 11:27 PM