Effects of the global warming in the Himalayas.Sharing viedeos of melting glaciers with Mail from Nepal.Palash Biswas

Effects of the global warming in the Himalayas.Sharing viedeos of melting glaciers with Mail from Nepal.Palash Biswas 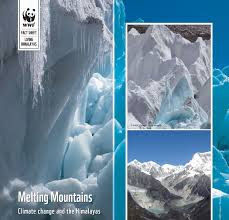 ▶ 7:39
https://www.youtube.com/watch?v=NFpPQF0OD30
Feb 5, 2008 - Uploaded by rajanmanb
The International Centre for Integrated Mountain Development (ICIMOD) in partnership with UNEP and the Asia ...

▶ 1:51
https://www.youtube.com/watch?v=n36EMqQ6k80
Oct 19, 2007 - Uploaded by FirstscienceTV
Experts fear that the effects of global warming may have disasterous results in Nepal in the near future. Taken ...

▶ 5:14
https://www.youtube.com/watch?v=Q8i8Dk4ncjM
Feb 13, 2015 - Uploaded by theaycc
Mountain environments all over the world, especially theHimalaya, are coming under new stresses and ...

▶ 2:51
www.ndtv.com › video
Nov 9, 2009
A new report by India's Ministry of Environment and Forests has suggested that the Himalayan glaciers are ...

Impact of Climate Change on Himalayan Glaciers and ...

▶ 22:59
https://www.youtube.com/watch?v=KpWX77J7Xmg
Sep 27, 2015 - Uploaded by FOCUS News
In this special report, the impact of climate change and global warming is being felt at India's last village ...

▶ 14:49
https://www.youtube.com/watch?v=YmQXGeVPv8Y
Jan 8, 2015 - Uploaded by Veditor
Climate Change in the Himalaya ... Documentary Lecture on Causes and Solutions for Global Warming ...

▶ 2:41
www.youtube.com/watch?v=HozBu6JSR0s
Apr 16, 2012 - Uploaded by NTVnewsTelugu1
Experts fear that the effects of global warming may have disasterous results in Nepal in the near future.

▶ 10:55
www.youtube.com/watch?v=912Fpi70G2A
Apr 3, 2013 - Uploaded by chinmaya dunster
Short film about climate change from the perspective of farmers in the Himalayas. Camera, music and ...

▶
www.emsfilms.com/himalaya-alert-web/
Looking behind the recent furore surrounding the science ofclimate change, Himalaya Alert searches out the ...

Subject: Re: AGAINST THE WRONG INTERPRETATIONFrom: manandhar.r@gmail.comRavi Manadhar JeeNamasteYou bring very pertinent issue to fore. There must be public information campaign and policies formed soon. I might add to pay more attention on ground water and forestation. Kathmandu is becoming like a concrete impervious surface. There must be points for surface waters to go down. House designs may be encouraged to have underground tanks to catch rain water. Matter of fact, the tanks and solar panels should be a part of architect, rather than later additional. I have read some where that wells (Toon / Inar) helps in dampening earthquakes and damage is less around it. Since we had earthquake, it may be good to do some research to see if it is really true. All we need to do is to go around and observe the damages in Chowks with and without wells. I wonder if geology, architecture and civil engineering students could be invited to do so. If it is really so, then wells would serve double as water source and earthquake dampening system.Thanks for your information.Sincerely,Tilak Shrestha, Ph.D.________________________________________________________________________

Effects of the global warming in the Himalayas

Chinese Climatologists have recently reported that the snow in the Mt. Everest is disappearing very fast due to the warming of the Earth and all the rivers fed by the glaciers in the Himalayas might dry up.

The report by the Chinese Climatologists should warn all of the planners of Nepal and the inhabitants of Kathmandu Valley that the dream of drinking water from the Melemchi River might end into a tragedy. The tragedy might be more disastrous than the ongoing scarcity of petrol.

I would like to opine that rain-water harvesting in Kathmandu Valley by constructing a dam at Chovar Gorge would be the most reliable strategy for meeting the drinking water needs of the capital city of Nepal. Not a single drop of water should be allowed to flow out of the Gorge by constantly deepening Bagmati River without any damage to the cultural heritage of the ghats.

Rain water is the cleanest water in nature that needs almost no purification. The only thing we have to do is to stop polluting the river. Sanitary management of the sewage generated by millions is another main part of the strategy. Bio-technologists might also be able to produce substantial amount of fuel from the human wastes generated by the millions every day.

I would like to suggest the 26 KM long tunnel being constructed to bring water from Melemchi to be adapted to bring liquid fuel from China by extending this tunnel to Tibet. Tibet is located much higher than Kathmandu and the tunnel would bring petrol by gravity with no need of pumps or tankers. The flooding of the river system of the Valley would also solve the problem created by the depletion of the under-ground water resources resulting into the rejuvenation of the age-old water fountains that would certainly enrich the tourism industry of Nepal. Bagmati River with a lot of water round the year might also open new possibilities for the development of river transportation that would help to stop the traffic congestion on the surface roads.

Religiously, I am not biased.The religious structure of Nepalese society is formally Hindu; but here and only here the interplay of peoples and their religious traditions has produced a rich fusion of Hindu and Buddhist faiths. It is common for both Hindus and Buddhists to worship at the same shrine, for many gods and saints are cross-over, often known by a different name but holding the same attributes. The original inhabitants of the valley were animists, a tradition which survives in the multitude of spirits, demons, local deities, and stones which receive dutiful worship to this day. Hindu and Buddhist traditions adapted from the pre-existing animist practices and from each other. Indeed, in the medieval period, when both religions' practice adopted mystical, Tantrik traditions, they were almost indistinguishable from each other.

Gautam Buddha was born in Lumbini in the 6th century BC in mid Tarai, Nepal. Nepal has been a pious and holy land for all Buddhists as well as all kinds of religious men and women. Buddha has guided human society on the path of peace, non-violence and prosperous thinking. Gautam Buddha meditated at Sarnath-Banarash and acquired the Light of Knowledge (Mokchya) under the holy fig-tree at Gaya, which is now called Buddha Gaya. The descriptions of famous ancient Chinese pilgrims, Huian Tsang (who traveled through India between AD 629 & 645) and Fa Hein (who traveled between AD 400 & AD 414) indicate to this area, saying, 'Lumbini, where the Lord was born, is a piece of heaven on earth where one could see the snowy mountains amidst a splendid garden embedded with Stupas and monasteries.'

Another Vedic scholar Prem Kumar opined- 'The Sun never sets or rises and it is the earth, which rotates (Sama-Ved 121). The gravitational effect of solar system makes the earth stable (R.V.1-103-2, 1-115-4 and 5-81-2). The axle of the earth does not get rusted and the earth continues to revolve on its axle (R.V. 1-164-29). The science of Time and its subtle nature is described in (R.V.1-92-12 and 1-95-8). The need to study the properties of water, air and fire for discovering and manufacturing aircrafts, ships and other vehicles capable of moving in the firmament, land and water are mentioned in Rig Veda 1-3-1,2, 1-34-1, 1-140-1 and many other hymns. Reference to infinite number of both gross and subtle atoms and the energy principle as spirit of God in each atom is given in R.V. 5-47-2 and Sama Veda 222. Atoms and sub atomic particles are not inert and have unsuspected vitality owing to this energy principle. Physical sciences relating to agriculture, medicine, astronomy mathematics particularly algebra, toxicology etc. are described in R.V.1-71-9, 4-57-5,Sama Veda 121 and many other hymns'.

We are proud to be Nepali. We want to be free of foreign intervention pertaining to our national unity, our traditional culture, and we will be free. Since the ancient times democracy has been a system that has been exercised and recited in Himwatkhanda. We have been adopting as the chief policy of giving equal opportunity to all to exercise their freedom, and we have tried to provide food and shelter for all. Religious freedom is our belief. Everyone has the right to follow their own religion. However, by showing the attraction of money, Christians have been alluring people to convert their religion; they have become one of the destroyers the foundation of Hindu religion, which we regard as enemies. Against such people all Hindu world must unite. We must all know that to bring secularism is to invite religious terrorism and civil war. Regardless of who we are; Rai, Limbu, Magar, Gurung, Newar, Brahman, Chetri, Kami, Damai, Sarki, Maithali, Bhojpuri, Awadhi among others, we are all either Hindu or Buddhist. Some Sherpa, Tamang and Newars are affiliated to Buddhism. No matter who follows what Pashupatinath and Swayambunath lay in the same world?
Thank you!
Namaste!
Dirgha Raj Prasai
Please, I want your comments.

--
Pl see my blogs;
http://ambedkaractions.blogspot.in/
http://palashscape.blogspot.in/
Feel free -- and I request you -- to forward this newsletter to your lists and friends!
Posted by Palash Biswas at 8:10 AM